We are less than one month away from what is sure to be the jazziest night of the year in Indy! Join us Sunday, June 10 at @The Jazz Kitchen for a benefit concert for Jumpin’ for Jazz. We’re working to improve the lives of children suffering from Friedreich’s ataxia, and YOU can help make a difference. https://www.thejazzkitchen.com/event/1691744.

If you haven’t watched “The Ataxian” movie, we highly recommend renting or purchasing the the movie. It has won several awards and has been reviewed by many critics. One of our favorite reviews is by The New York Times and this is just an excerpt from that review:

“A couple of years back, the ice bucket challenge was a social-media sensation, raising an estimated $115 million for research into amyotrophic lateral sclerosis, or Lou Gehrig’s disease.

Not all such ailments receive that kind of visibility — or promotion. Friedreich’s ataxia, a little-known, progressive, fatal neuromuscular disease, has no cure; most heartless of all, its onset usually occurs in young children, who are unlikely to reach the age of 30.

“The Ataxian” follows Kyle Bryant, an athletic, charismatic Californian with the disease whose ability to walk and speak has already been impaired, as he channels his energy into raising awareness and money for research. He wants, he says, “to do something crazy!” and assembles a team of four bicyclists — including himself (on a recumbent bike) and Sean Baumstark, a friend who also has the disease — to take part in Race Across America, an annual competition that covers 3,000 miles in nine days…”

To learn more about “The Ataxian” movie, click here.

Reata Pharmaceuticals has enrolled the first patient in the pivotal Part 2 of its MOXIe study designed to evaluate omaveloxolone (RTA-408) in Friedreich’s ataxia (FA) patients. Learn more about this by clicking here 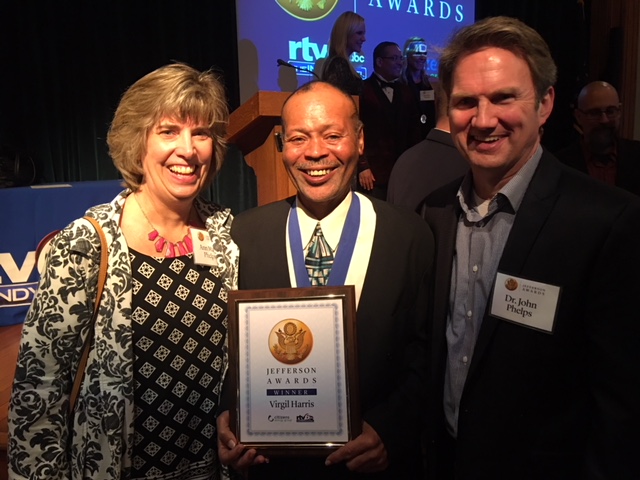 On April 18, 2018, Virgil Harris was recognized by the Jefferson Awards Foundation for his service to the community. Mr. Harris organized and started Jumpin’ for Jazz (a charitable organization) to find the cure for Friedreich’s Ataxia and its devastating complications through the support and advancement of research; and to actively serve the 5,000-6,000 young people in the United States affected by Friedreich’s Ataxia — a rare, untreatable and incurable disease inherited at birth. 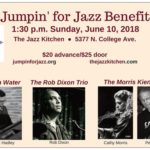 The Jazz Kitchen, Indy’s greatest jazz club, will host a benefit concert for Jumpin’ for Jazz on Sunday, June 10, from 1:00 to 4:00pm.

Look forward to enjoying the music of:

$20/person online. To purchase tickets in advance, Click here
$25/person at the door

For more information about the Jazz Kitchen, Click Here